GCPL has just learned that by popular request, hoopla is making it easier to do just that through Android Auto!

With your Android device and a vehicle that supports Android Auto, you can play audiobooks and music you have borrowed directly through the vehicle’s in-dash display.

hoopla does have plans for Apple CarPlay. We will keep you posted with new developments as we get them! 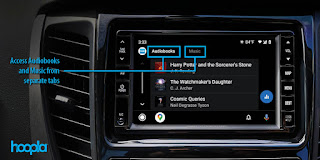 at October 19, 2021 No comments:
Email ThisBlogThis!Share to TwitterShare to FacebookShare to Pinterest
Labels: hoopla

Looking for a Good -- Not Necessarily New -- Book?

When the library started its first blog using tumblr™, librarian Michele Risinger posted teasers and reviews of books and online games she found interesting. (Hence the pseudonym “The Techie Librarian.”) This review was among her first postings, and I am particularly attached to it, because I recommended the book to her … and she liked it!  So, with her permission, I am republishing her review of Raptor Red by Robert T. Bakker, and yes! the library still owns a copy. 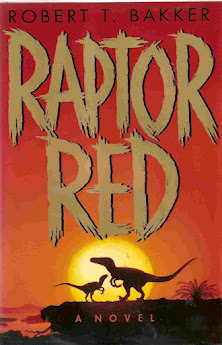 This novel was originally published in 1995, just a couple of years after the movie Jurassic Park was released. Bakker, a world-renowned paleontologist, was an unofficial consultant for the film. The novel reads like a documentary — you can almost hear the cultured, British accent in the voice-over in your head (or is that just me?). This superbly well-written tale follows an adult female Utahraptor — referred to as Raptor Red — as she migrates across the North American continent and experiences the difficulties of life during the Cretaceous age. A really interesting perspective on evolution, and romance, in a previous age. [The Techie Librarian]

Then I reblogged it:

Me:  I stumbled onto this book some years back in the drugstore paperback section.  Just a lucky buy.  Then I recommended it. The Techie Librarian tells me this is the most re-blogged post!

at October 14, 2021 No comments:
Email ThisBlogThis!Share to TwitterShare to FacebookShare to Pinterest

We're Booked Up - The Noise

We started a new segment for Gaston Speaks! We’re calling it We’re Booked Up and each episode will be a book discussion between Angelique, Kendall, and Andrew. In each episode we’ll share our opinions about a book we chose, rating the book and sharing what we liked and disliked about it. Like a little book club! For this episode we decided to start with The Noise, a thriller from James Patterson and JD Barker.

Click on the picture below and give it a listen or look up Gaston Speaks on your preferred podcasting app and find the episode. And after listening, let us know what you thought of the book, or of our thoughts on the book. 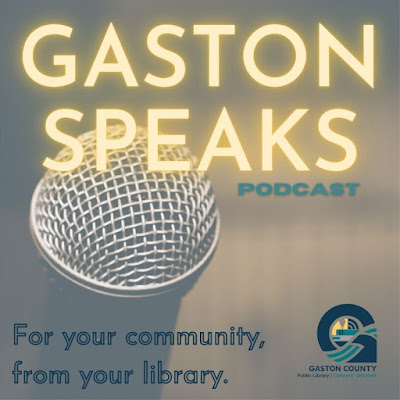 For the next episode, we plan to discuss All System Red by Martha Wells, the first book in Wells' The Murderbot Diaries series, featuring a socially anxious security android with a newfound sense of independence.

at October 06, 2021 No comments:
Email ThisBlogThis!Share to TwitterShare to FacebookShare to Pinterest
Labels: Libby, OverDrive

On Thursday, October 7 from 8:00 am-9:00 am, NC LIVE will perform updates on their servers. This may result in a brief interruption to service.

We apologize for any inconvenience.

at October 06, 2021 No comments:
Email ThisBlogThis!Share to TwitterShare to FacebookShare to Pinterest
Labels: NC LIVE

What do you remember about October 1997? Personally, I was eleven and just starting middle school, but as the year progressed, I vaguely remember rumblings about things happening on Cramer Mountain and something about a velvet Elvis painting. 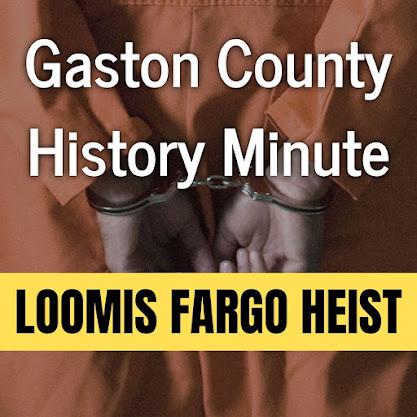 In today’s episode of the Gaston County History Minute, we go over some of the details of the October 4, 1997 Loomis Fargo Heist. You can access the episode by clicking on the picture above, or searching for Gaston Speaks on your preferred podcasting app.  After listening, if you want to learn more about the crime, check out the provided transcript and sources by clicking here, or contact the new Local History & Genealogy Section of the Gaston County Public Library located on the 3rd floor of the Main Library on 1555 E. Garrison Blvd.

And share your Loomis Fargo Heist memories with us in the comments!

Welcome to the official blog of the Gaston County Public Library! Your source for everything GCPL. You’ll find library news, programming inf...